With the U.S. Geological Survey estimating 71.1 billion barrels locked in East Africa (the most significant deposits occurring in Northern Kenya), the lower half of this massive intercontinental resource has yet to make any impact at all on the region's economy. 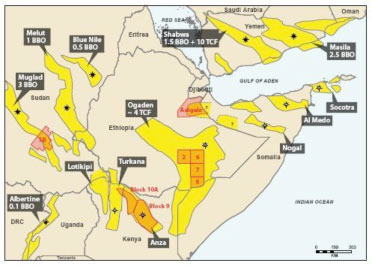 Remember, these aren't similar or comparable to the oil formations that made the Saudis the richest people in the world... These are the same formations! Sit untapped underneath the East African landscape.

But why would such unimaginable wealth remain untouched, while the rest of the African continent is teeming with new oil wells?

The answer, unfortunately, has nothing to do with the wealth available to be had — but with the political stability of the region.

Wracked with violence and anarchy for years, Kenya's northern neighbor, Somalia, continues to make headlines today with stories of roving death squads, kidnappings, and piracy on the high seas.

It's a reputation that, up until now, has kept companies and investors at a distance... and not just from Somalia, but from the entire region.

Which means that East Africa, one of the world's richest oil regions, remains the world's least developed. This, however, is already rapidly changing.

Kenya — the jewel of this energy-rich geology — is now in its third straight decade of political and economic stability.

It's brought riches to the nation through the tourism and transportation industries and turned Nairobi into the biggest, most prosperous metropolis in all of East Africa. 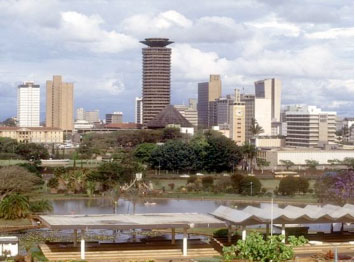 As global energy prices shoot up and reserves dwindle everywhere they were once abundant...
The real investors are finally staking their claims in this unexploited land.

You see, finding new sources of oil is no longer a matter of convenience...
It's a matter of survival.
Of course, this isn't exactly news to the oil industry...

In fact, over the last 25 years, a pattern has emerged. And it's about to make investors billions as it repeats itself.

The Missing Link: Kenya
In 2005, these were Africa's top 10 oil producing nations: 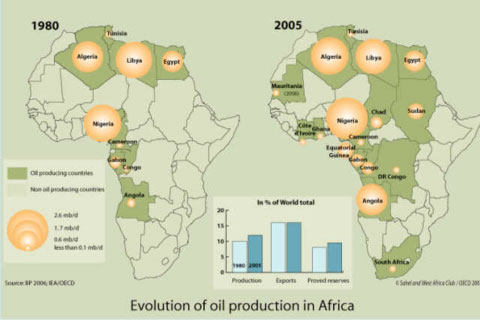 Viewing the activity in this region of the last 25 years, you can see a pattern taking shape...

Industrial development of the continent began in the West, in the North, and in the South — everywhere but the East. But gradually, over time, the Eastern frontier has been pushed.

As of five years ago, only the far Eastern nations remain virgin ground, while the rest of the continent pumps 1/8th of the world's daily crude supply.

And taking into account what the Soviet-gathered surveys and USGS geological analyses have told us about the legendary Middle Eastern oil formations extending past the East Africa Rift...

It becomes clear why international energy companies, mining explorers, and institutional investors all have their eyes on a single East African nation: Kenya.

As I mentioned a moment ago, not only has Kenya been stable and peaceful for three decades; but as the regional and transportation hub, it's also East Africa's fastest-growing economy...

Most importantly, the Kenyan population itself has adapted to the modern 21st century electronic infrastructure with remarkable speed...

In fact, with 6.0% annual growth projected for 2011, Kenya is securely in the top 25% of all national economies in the world — impressive, compared to the 1.5% annual growth of the United States.

But it's only a hint of what's possible.

Because just to the west, where the oil industry is already ramping up production, the neighboring Republic of Congo is #4 on the list of fastest growing economies with an astounding 11.9% expansion reported in 2010...

And all the signs, all the experts, all the charts, and all the industrialists point to this pattern continuing its march east.

What's already happened in the Republic of Congo, in Angola, Nigeria and Sudan... is about to happen again. And people are starting to notice.

Investors are Already Here
As Kenya's economic fortunes rise and its political atmosphere remains more stable than it's been in decades, major industrial players are starting to sink their teeth in.

So far, it's been one of the fastest-moving bull runs the oil industry's ever seen.

In just over a year, this whole thing has climbed to a fever pitch.

It all started in April of 2010 with the National Oil Corporation of Kenya, in conjunction with the government, made an appeal to the national geological community for help in constructing hyper-accurate maps of off-shore and inland oil formations...

The results of the ensuing investigations made it into the hands of oil executives from companies based in North America, Europe, and China. And they pounced almost immediately.

And then, the bombshell:

And they had a very good reason to do so...

You see, just miles from these disputed Kenyan properties, across the border in Uganda, Tullow has already made a discovery that's caused the entire petroleum industry to stop what they were doing and scratch their heads:

These discoveries — with a gross resource value of more than $200 billion — have taken place right along the Kenyan border...

And unlike Uganda, Kenya's property extends out to sea where additional deposits have already been mapped out.

So Uganda was nothing more than a dress rehearsal.

The real show is in Kenya.
Any doubt that this is where Tullow is heading was forever silenced in March, when Tullow publically announced a Kenyan drilling start date in August 2011.

And this is still just the beginning for full-throttle East African oil.

On March 28th — less than a week after the Tullow announcement — UK-based oil miner Afren increased its holdings along the Kenya/Tanzania border by 1200 square miles.

With new exploration blocks being negotiated this very moment... it simply couldn't have come at a better time for East Africa.

Now that oil prices have finally spiked over $100 on the back of what's turning into pan-Arab revolution...

All the ingredients necessary to realize a full-fledged East African oil boom are in place.
It's a situation that's taken a couple years to set up, and is only now making its true impact.
Source: http://www.angelnexus.com/o/web/29125
at 6:40:00 PM